Nanomedicine is a subfield of nanotechnology that holds the immense potential for biomedical application. However, with the great possibilities that come with nanotechnology, there are many challenges that must be overcome before nanomedicines can be pervasively translated for human use. 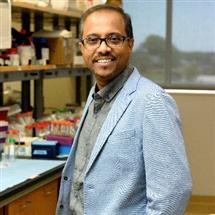 Protein corona form on the surface of the nanoparticles when they encounter biological fluids, such as when they are injected into the bloodstream. 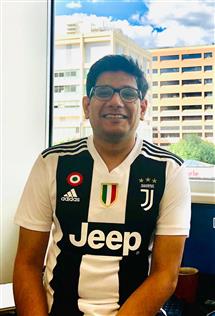 Indrajit Srivastava, Bioengineering Ph.D. candidate.
"There are two types of coronae. The hard corona is the innermost layer on the nanoparticle that gives these particles a specific identity. The soft corona is the outermost layer that interacts dynamically with the hard corona." said Indrajit Srivastava, Bioengineering Ph.D. candidate and lead author of the study.

"Many proteins that get attached to the surface can be detrimental," said Pan. These proteins may signal to the immune system that a nanoparticle is a foreign object and should be thrown out of the body. "This is a major cause of failure for nanomedicines," he said.

The traditional approaches to studying the protein corona use expensive instrumentation, take a long time to evaluate, and are generally conducted under static conditions that do not account for the movement of the nanoparticles in the body. Instead, the team used an integrated microfluidic platform to create a dynamic environment with precise control over fluid flow allowing shear force being imposed on nanoparticles and proteins. This results in a rigorous mixing thereby simulating a realistic biological environment such as in the bloodstream. This method also improves reproducibility because researchers can control the flow rates of each experiment. 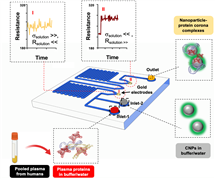 Integrated microfluidic platform with an electrical resistance measurement setup.
The researchers took carbon nanoparticles with varied surface charges (positive, negative, neutral, zwitterionic) for this study as they will interact with proteins in the blood differently. Once these proteins adsorb on the nanoparticles, it results in a decrease in electrical conductivity of the solution, consequently leading to an increase in resistance of the solution flowing through the device that can be captured by the gold electrodes. This trend would be different for nanoparticles with different surface charges and the real-time data collected was then analyzed via machine-learning and wavelet transform tools to differentiate between soft and hard coronae.

The team collaborated with BIOE Professor Rashid Bashir’s group to perform COMSOL simulations on optimizing the fluid flow of nanoparticles and proteins in the microfluidic device.

"We came up with a very simple tool that can help us understand whether a particle would survive in the systemic circulation or not, " said Pan.

"Up until now, the techniques that were developed to study protein corona were only able to study the hard corona," said Srivastava. "But using our platform, an added benefit is that we have been able to study both the hard and soft corona forming on the nanoparticles in a real-time fashion."

This platform technology opens up the possibility of doing future studies to better understand how nanoparticles might behave in the human body and could eventually be used to screen nanoparticle formulations for reduced protein adsorption thereby enhancing the success of targeted drug delivery.

Pan was a full-time faculty member of the Beckman Institute for Advanced Science and Technology and an inaugural faculty member and course director for Carle-Illinois College of Medicine. The work was primarily carried out at Mills Breast Cancer Institute at Carle Foundation Hospital and Materials Research Lab at the Grainger College of Engineering . The other team members contributing to this study from the U of I are: Dr. Muhammad Khan, Ketan Dighe, Maha Alafeef, Kevin Wang, Dr. Tanmay Ghonge, and Lauren Grove and Wolfram Research: Dr. Tuseeta Banerjee.