The home of the bioengineering department

Following a $55 million renovation in 2018, the new Everitt Laboratory now serves as the centralized hub for the department of bioengineering where we are training the next generation of healthcare innovators and leaders, conducting research to help improve the human condition, and serving as the conduit for multidisciplinary research collaborations that promise to transform medicine.

More than 1,200 students and faculty from engineering and medicine across campus learn, teach or work in Everitt Lab on any given day.

For more details on Everitt Lab, download this booklet.

“My favorite university memory was walking into Everitt Lab for the first time after the construction was finished. I remember the feeling that I had when I knew this was a place I could call home where my undergraduate experiences and memories would be made.”

The legacy of William L. Everitt 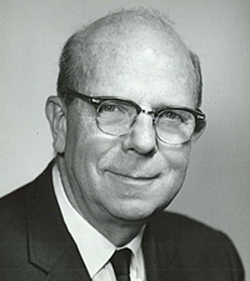 Everitt rose to prominence during the late 1920s and ’30s while at The Ohio State University, where he earned his Ph.D. There he also wrote the book, “Communication Engineering,” first published in 1932 and followed by three editions, which introduced several generations of students to the telecommunications field.

During World War II, Everitt made important contributions especially as a radar pioneer, including inventing the radar altimeter, which is used in all aircraft in some form to this day. He also developed early network and antenna designs.

After the war, in 1945, Everitt became EE department head at Illinois. In 1949, the EE Building was completed, and that same year, he became dean of the College of Engineering, where he implemented collegewide reforms for the next 19 years.

Everitt also held nearly every major office in key professional and engineering education societies, influencing engineering curricula on a national scale. He served as a founding member of the National Academy of Engineering, and he was especially proud of helping to bring Illiac I online in 1952 — which was both the University of Illinois’ first computer and the first computer built and owned by a U.S. educational institution.

Everitt retired as dean in 1968 but continued to influence U.S. telecommunications policy and direction via his membership on several committees and panels. During his lifetime, Everitt also received many prestigious awards and honors, including the Institute of Radio Engineers Medal of Honor, being named one of the Top Ten electrical engineers of all time by the Institute of Electrical and Electronics Engineers, and receiving 10 honorary doctorates.

William L. Everitt died in Urbana, Ill., on September 6, 1986, at the age of 86 and later was inducted into the Engineering Hall of Fame at Illinois. In 1988, the EE building was renamed Everitt Laboratory in his honor, and it carries his name to this day.

Renovated Everitt Lab provides modern instructional and research facilities for learning, creating and innovating thanks to the Grainger Foundation, which provided a $20 million lead gift through its Grainger Breakthroughs Initiative. Jump Trading provided a $10 million gift to establish the Jump Simulation Center in Everitt Lab, which is part of the new Carle Illinois College of Medicine. If you would like to support William Everitt's legacy, please consider contributing to the Everitt Laboratory fund.