Illinois Bioengineering Professor Brad Sutton has been elected a 2018 Fellow of the American Institute for Medical and Biological Engineering (AIMBE)--one of the highest professional distinctions accorded to a medical and biological engineer. Sutton was elected for outstanding contributions to image reconstruction technology for magnetic resonance imaging, enabling new applications of neuroimaging and dynamic imaging.

Sutton develops innovative MRI techniques to image brain structure and function. He has focused on developing sensitive methods to image the physiological changes in the brain associated with age and disease. 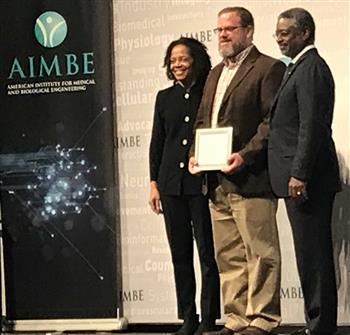 Bioengineering Professor Brad Sutton (center) was inducted as a fellow of the American Institute for Medical and Biological Engineering today at the organization's annual meeting in Washington, DC.

Working with cognitive psychology researchers at the Beckman Institute, Sutton’s group is exploring MRI-based biomarkers that indicate healthy and unhealthy aging related to a variety of interventions, including aerobic exercise and nutrition. His MRI techniques measure function, structure, blood flow, white matter health, and even mechanical properties of the brain.

Specifically, his group has developed measures of blood flow through the arterioles and capillaries in the brain, providing information about their flow rate through a combination of novel techniques, such as Flow Enhancement of Signal Intensity (FENSI), and obtaining information about the structure of the blood vessels through a technique known as intravoxel incoherent motion (IVIM). With these measures, Sutton and his collaborators have developed sensitive biomarkers reflecting the relationships between blood flow, age, cardiorespiratory fitness, and performance on cognitive tasks.

They have also developed novel methods to address the impact of magnetic field distributions inside the MRI scanner and have drastically increased the achievable spatial resolution in diffusion weighted scans that examine the integrity of white matter structures in the brain. They do this through careful modeling of the physics of the MRI experiment and combine it with high-performance computing resources available at Illinois through the Blue Waters supercomputer at NCSA.

A faculty member since 2006, Sutton is the technical director of the Biomedical Imaging Center at the Beckman Institute, a state-of-the-art facility committed to developing cutting-edge techniques that integrate magnetic resonance methods with other imaging techniques in humans and preclinical models.

Sutton and 156 colleagues were inducted into the AIMBE College of Fellows April 9, 2018, at the organization's annual meeting in Washington, DC.

In addition to the AIMBE honor, Sutton received the 2018 Beckman Institute for Advanced Science and Technology Vision and Spirit Award. The award, in the amount of $150,000, recognizes a researcher at the University of Illinois Beckman Institute who exemplifies founder Arnold Beckman’s vision of excellence, interdisciplinarity, and collaboration. Beckman and his wife, Mabel, contributed $40 million to the institute, which opened in 1989.