Coupling their new microfluidic technique with a flow cytometer, researchers at the University of Illinois at Urbana-Champaign and the H. Lee Moffitt Cancer Center in Tampa have demonstrated that they can count individual molecules as they move through a microtube and analyze their identity by tagging them as they pass through a laser.

Using a flow cytometer to analyze cells is a standard procedure that has been widely available in laboratories for decades, but evaluating single molecules — which are about a billion times smaller than cells — is more difficult. For the first time, the Illinois and Moffitt researchers have used the flow cytometer to evaluate molecules via their new technique, which they call "single-molecule flow (SM-flow)."

Typically, a flow cytometer funnels cells suspended in liquid through a tube that forces them into a single-file formation and passes them through a laser beam. As they encounter the laser, each cell emits light that allows the researcher to analyze and characterize the cells individually. For sub-cellular evaluation of molecules, the system falls short.

In this study, as molecules passed one by one through the laser, they caused an abrupt spike in light intensity. The team engineered how the molecules interact with light, tagged them with multi-color fluorophores — chemical compounds that absorb and emit light — and cross-correlated the optical results. This new approach allowed the team to amplify the signal-to-background ratios by 1600-fold, allowing detection of single molecules across four orders of magnitude of concentration.

Andrew Smith, an associate professor of Bioengineering at Illinois and the Carle Illinois College of Medicine, leads the team that showed that this technique allows for detection of the lowest concentrations of microRNA molecules, which are disease biomarkers found in blood.

“We are using this to detect and quantify one particular biomarker called miR-375, which can be used to predict how patients with prostate cancer will respond to therapy," Smith said. "We show that microRNAs can be barcoded with unique optical identities, so that potentially hundreds to thousands of different markers can be simultaneously counted from the same blood specimen.” 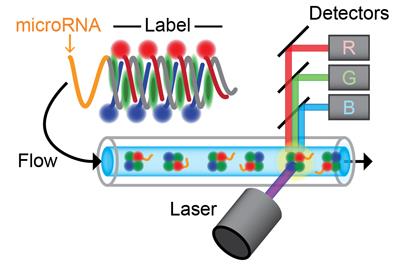 The schematic depicts the new SM-Flow technology. A microRNA molecule (orange) is extended with light-emitting labels (blue, green, and red) before injection into a microfluidic channel, in which the molecules are detected one by one as they pass through a laser beam. The light emitted from each molecule is measured in detectors for blue, green, and red light.
The work also has implications in analytical chemistry, biophysics, enzymology, and cellular biology, and the researchers say they expect their new technology can be immediately accessed for "high-throughput, multiparametric, single-molecule measurements" due to the wide availability of flow cytometers, "and can further be adapted to the diverse range of molecular amplification methods that are continually emerging."

The team developed their new technique because they wanted to count molecules in cells and tissues and to be able to detect biomarkers in blood.

"We originally developed tests based on microscopy and imaging, applying the same techniques we were using for cells," said Smith. "However, we realized that the throughput was simply too low and the procedure was too laborious. We wanted to count the molecules rapidly and use simpler instruments. Other efforts in our lab using flow cytometry to evaluate cells within tissues provided the connection that we needed to invent this technology, in which a standard flow cytometer could be used to count molecules instead of counting cells, eliminating the complex microscopy routine that we used previously."

This work is part of a larger effort supported by the National Cancer Institute and the University of Illinois at Urbana-Champaign through the Cancer Center at Illinois, the Carl R. Woese Institute for Genomic Biology, and The Grainger College of Engineering to develop a center for diagnostic tests based on genes and other molecules present in blood and other fluids.

The team's paper, “High-Fidelity Single Molecule Quantification in a Flow Cytometer Using Multiparametric Optical Analysis,” was published in January 2020 in the journal ACS Nano and is available online at pubs.acs.org/doi/abs/10.1021/acsnano.9b09498 .