The distance of microbial competitions shapes their community structures

Inside the microbial communities that populate our world, microbes are fighting for their lives.

These tiny organisms are in the soil, in the oceans, and in the human body. Microbes play several important roles – they can decompose waste, make oxygen and promote human health. 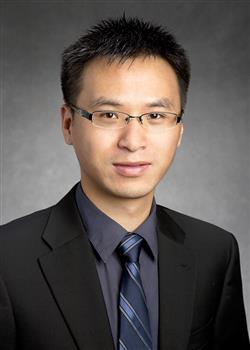 Within communities, microbes constantly compete with each other for space, nutrients and other resources. Their competitions can occur across multiple spatial scales, whether the microbes are close together or far apart.

When microbes are close together, they assemble a molecular device to inject toxins into their neighbors, suppressing their growth. When far apart, microbes release a small toxic molecule that travels through the community into other cells, causing their death.

Ting Lu, an associate professor of bioengineering and IGB faculty member, wanted to know if the varying distances of interactions affect the organization of microbial communities. Addressing this question can help researchers understand how these communities assemble.

Lu and his lab members —Venhar Celik Ozgen, Wentao Kong, Andrew Blanchard, and Feng Liu — developed mathematical models and a set of synthetic microbial communities to study the role of varying distances during microbial battles. They created ecosystems that involved one-directional competition, where one microbe kills another, and ecosystems with bidirectional competition, where two types of microbes kill each other.

Their results, published in Science Advances, reveal an important reciprocal relationship between space and time.

In the community where one type of microbe kills another, the researchers found that long-range competition was more effective, as it took less time for the microbe to kill its competitor at a long range than at a short range.

Next, they studied the community where two types of microbes kill each other. Lu said their findings can best be understood by picturing two armies meeting in a battlefield, where one army has swords (contact-dependent molecular killing devices) and the other has arrows (diffusible toxic molecules that attack other microbes).

“When those two armies have a close fight, the sword is more potent because it can kill the enemy right away,” Lu said. “However, if those parties are separated by a river, for instance — although the sword is more lethal, it’s out of their range.”

At a close range, the contact-dependent devices were more effective. At long distances, diffusible molecules were more effective. That’s why, in such two-way competitions, the density of the microbial population matters. If the population is dense, microbes are forced to compete at a close range, and those who use contact-dependent devices win. If the microbes are more spaced out, they compete at a long range, and those using diffusible molecules win.

The authors said that, to their knowledge, this is the first experiment to dissect the role of spatial interaction scale in the organization of microbial ecosystems. Lu said their results deepen their knowledge of how microbial communities assemble and function.

Their findings will also help with creating artificial microbial ecosystems, which can be used to treat diseases or increase plant growth.

“By learning the underlying organization . . . (it will) also help us design better ecosystems which can deliver functions more effectively and in more potent ways,” Lu said.

Lu said the variation of interaction distances also frequently occurs in animal and plant cells, so their findings can provide insight into the organization of multicellular organisms as well.

“Although we focus on studying the spatial organization of microbe populations, we believe the knowledge that we learn for bacteria could be generalized and translated to other living systems,” Lu said.

This research was funded by the National Science Foundation, the Office of Naval Research, the American Heart Association, the Brain and Behavior Research Foundation, and the NCSA at Illinois.