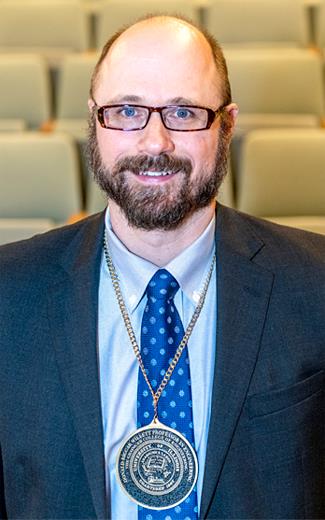 Anastasio, who joined Illinois as a Bioengineering faculty member and the department head in March 2019, has a background in electrical engineering, physics and medical physics. He guides a department with more than 350 students and 50 tenured, teaching and research faculty.

“I am thrilled and honored to lead the Department of Bioengineering into its next exciting phase of growth,” Anastasio said. “Due to the wonderful community of scholars conducting basic science, biomedical and engineering research at Illinois, along with access to world-class engineering facilities and interdisciplinary research centers and institutes, the department is poised to achieve preeminent status.”

In 2006, Anastasio won a National Science Foundation CAREER Award to develop image reconstruction methods, and he currently serves as the chair of the National Institutes of Health's Emerging Imaging Technologies and Applications study section.

At Illinois, he also leads the Computational Imaging Science Laboratory, which works on projects that address important needs in clinical medicine and basic biomedical research, such as improved imaging methods for the early detection and management of cancer, vascular diseases, brain injuries, and characterization of biomaterials. Much of his research focuses on imaging physics and developing image reconstruction algorithms, and he has been actively involved in the development of several emerging wave-based bioimaging modalities. Anastasio’s work has been published extensively in imaging and optical science journals.

“He has been an invaluable addition to our faculty, and I look forward to what he will do in the years to come,” said Rashid Bashir, dean of the Grainger College of Engineering at Illinois.

The Donald Biggar Willett Professorship honors the memory of its namesake, who attended the University of Illinois from 1916 to 1921. Willett started his career as a partner in the family business, Suburban Coal and Supply Company, and later worked as a self-employed bookkeeper and tax preparer. In 1994, his widow, Elizabeth Marie Willett, willed her entire estate to the College of Engineering (now the Grainger College of Engineering), which established the Willett Research Initiatives Fund to support professorships, undergraduate and graduate student research, and related research activity.