A team of Bioengineering students from the University of Illinois at Urbana-Champaign won three awards, including the top prize, in the 2019 BMES Coulter College Venture Capital Pitch competition in Minneapolis on August 4. The students presented their idea of creating a replacement valve that grows with the patient for use in pediatric congenital heart defect surgery.

Sponsored by the Biomedical Engineering Society (BMES), the Wallace Coulter Foundation and Medtronic, the Coulter College competition is a four-day nationwide contest and learning opportunity that brings together teams of four students who are rising college seniors to help the students gain a better understanding of how innovative biomedical ideas are translated into solutions for clinical needs. 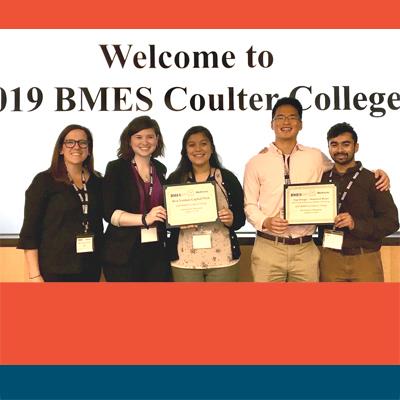 Teams arrived at the competition with an idea of which track they were assigned: Diabetes, Hypertension, or Structural Heart. During Day 1 they pinpointed an issue and created and gave a presentation describing their project. Realizing that there currently are no “growable” heart valves on the market, the Illinois students decided to tackle that aspect of pediatric heart valve replacements. The team’s solution includes yearly injections to help the valve’s leaflets — flaps that open and close — grow with the patient.

After the first presentation, teams received feedback and advice from Medtronic representatives, venture capitalists and clinical mentors who talked about the business side of bringing a biomedical device to market. Students learned about the FDA process, required testing, development timelines, costs, and more to help them understand the steps between innovation and commercialization of their ideas, and then the teams revised their presentations to present improved pitches on Day 2.

The last time an Illinois team won the top Coulter College award was in 2014, when the students presented their idea for a potentially lifesaving multiple-IV-tube detangling device.

The Coulter College competition, which is supported by the Wallace H. Coulter Foundation, created the student division in 2012, previously having been a training opportunity for faculty and researchers. Student participants receive travel support, accommodations and meals during the contest. The late Wallace Coulter was an inventor and electrical engineer who held 85 patents. He died in 1998, and the Wallace H. Coulter Foundation was created that same year. It provides resources to develop education programs and help accelerate academic innovations to the marketplace.

As part of winning the top award, the Illinois Bioengineers earned prize money and travel support to present their project at the annual meeting of the Biomedical Engineering Society (BMES) in mid-October in Philadelphia.