There are many anti-cancer therapeutics that are effective at killing cancer, but some can have serious side effects, eventually causing heart attacks.

Illinois researchers are studying the cardiotoxicity of doxorubicin (DOX), one of the most commonly used chemotherapeutic drugs. It’s also one of the oldest in its class, known as anthracyclines, and is considered an “essential drug” by the World Health Organization.

A paper published in Biochemistry, “Arachidonic Acid Metabolism by Human Cardiovascular CYP2J2 is Modulated by Doxorubicin,” outlined the findings about a new mechanism of doxorubicin cardiotoxicity. It was named an exemplary paper in its field by peer review service F1000 Prime, earning the designation of a “recommended article.” 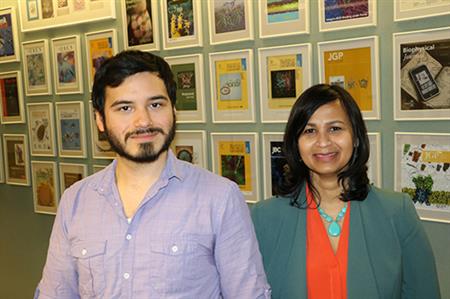 William Arnold (left), a graduate student in biochemistry in the School of Molecular and Cellular Biology, and Aditi Das, an assistant professor of biochemistry and bioengineering graduate program faculty member, published a paper in Biochemistry that outlined the findings on a new mechanism of doxorubicin cardiotoxicity.

“Doxorubicin can be very effective at attacking the cancer,” said Aditi Das, an assistant professor of comparative biosciences, of biochemistry, and of biophysics; graduate program faculty member in Bioengineering; and member of Beckman’s 3D Micro- and Nanosystems Group. “However, patients undergoing doxorubicin treatment can reach a lifetime cumulative dose that becomes cardiotoxic.”

“By figuring out what causes the cardiotoxicity, pharmaceutical companies can design better and better analogs that don’t harm the heart,” Das said.

“When we think of taking a drug, we think of its side effects,” Das said. “But we forget that the drug can be converted to metabolites that might produce a different type of side effect. Hence, we should study the pharmacology of the downstream metabolites as carefully as the primary drug.”

Cytochrome P450 enzymes metabolize all the foreign substances that enter the body including food and drugs. However, the new metabolites that are produced can work in either a positive or a negative manner leading to unpredictable outcomes. The cytochrome P450 enzymes are present in all the organs in the body, but drug development is often specifically targeted on the liver. “It’s important to note that the enzymes are not only in the liver, but also in the heart, the brain, and in other organs,” Das said. “We need to study the cardiotoxicity of drugs using cardiac enzymes, not just liver enzymes. There are a lot of drugs that fail that way. We need to make sure that drugs are safe, not just ‘good enough.’”

The researchers want to understand how cardiotoxicity develops, which could be through multiple mechanisms, in order to provide important information to be used to make a new drug derivative that doesn’t hurt the heart.

“We know that fatty acids (omega-3s and omega-6s) have a positive benefit to our health,” said William Arnold, a fourth-year Ph.D. student in the Department of Biochemistry. “One of the benefits is that they are converted in our bodies to help against things such as inflammation. And, they help the heart in many ways, including combatting inflammation, so they are generally considered cardioprotective.”

The study focused on CYP2J2, a human cytochrome P450 that is strongly expressed in cardiomyocytes and is the primary enzyme responsible for turning fatty acids into cardioprotective compounds. 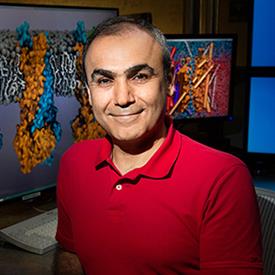 The researchers collaborated with the NIH Center for Macromolecular Modeling and Bioinformatics at the Beckman Institute, led by Emad Tajkhorshid, a professor of biochemistry, biophysics, and bioengineering.

The researchers collaborated with the NIH Center for Macromolecular Modeling and Bioinformatics at the Beckman Institute, led by Emad Tajkhorshid, a professor of biochemistry, biophysics, and bioengineering. Together with Javier L. Baylon, formerly affiliated with the Center for Biophysics and Quantitative Biology and the Beckman Institute, they performed the computational component of the research, which was critical to the molecular understanding of how the primary metabolite of the drug changed the site of metabolism of the omega-3 fatty acids leading to adverse drug-drug interactions.

“Seeing is believing,” Tajkhorshid said. “Through combining extended molecular simulation of the enzyme in its realistic environment of the cellular membrane with detailed analysis and visualization, we could provide a detailed picture of differential binding of these drugs to the binding pocket of the enzyme which helped with the design of experiments.”

The research was supported by an American Heart Association Scientist Development Grant and National Institutes of Health Grant.