University of Illinois at Urbana-Champaign Bioengineering Professor Rashid Bashir will receive the 2018 Robert A. Pritzker Distinguished Lecture Award at the Biomedical Engineering Society’s (BMES) annual meeting on October 18 in Atlanta. The premier award from BMES, it recognizes outstanding achievements and leadership in the science and practice of biomedical engineering. 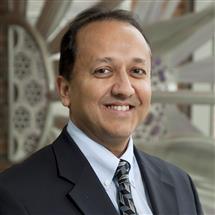 Bashir’s research focuses on integrating engineering and technology with biology, from the molecular scale to tissues and systems. Among other innovations, his group has developed various lab-on-a-chip technologies, miniature biological robots, and point-of-care diagnostic devices, leading to the creation of multiple startup companies.

He has published more than 200 journal papers, has been granted 44 patents, and has licensed technology to his startups and other companies. He is a fellow of six international professional societies (IEEE, AIMBE, AAAS, APS, IAMBE, and BMES).

A faculty member at Illinois since 2007, Bashir has served in multiple leadership roles on campus, including director of the Micro + Nano Technology Laboratory (2007-13), head of the Bioengineering Department (2013-17), and more recently as the executive associate dean of the new Carle Illinois College of Medicine (2017 – present). He serves as the co-principal investigator and the Illinois campus lead for the NSF Center for Emergent Behaviors of Integrated Cellular Systems, in collaboration with MIT, Georgia Tech, and other university partners.

“I am deeply humbled and honored to receive this award,” said Bashir, the Grainger Distinguished Chair in Engineering. “It’s a recognition not just for me but, more importantly, for the students and research group members and collaborators over the years. I am also very thankful to the academic institutions (Illinois and Purdue) that I have been at.”

Bashir will deliver a plenary lecture on his research as it relates to the current state of biomedical engineering and offer a vision of its future as part of the BMES meeting. He will speak Thursday, October 18, at 10:15 am.

The prize’s namesake, Robert Pritzker, was an industrial engineer and philanthropist who ran the Marmon Group, one of America’s largest private companies. Pritzker died of Parkinson’s Disease in 2011.