Dipanjan Pan was elected a 2018 Fellow of the American College of Cardiology for his contributions to translational nanomedicine in cardiovascular science. Working with clinical researchers, Pan has developed several patented classes of targeted theranostic nanotechnologies that are useful for diagnostic imaging and drug delivery in the treatment of artherosclerosis and cancer. In fact, scientists at Washington University have licensed this technology for commercial development. 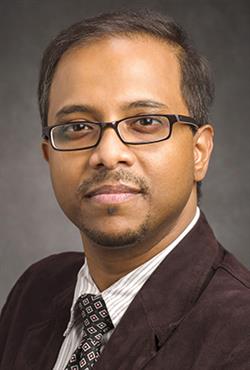 Dipanjan Pan has been elected a 2018 Fellow of the American College of Cardiology.

The donut-shaped artificial cells are about one-fiftieth the size of human red blood cells. Initial tests showed that ErythroMer matches the vital oxygen binding feature of human red blood cells within 10 percent, which may be sufficient to stabilize a bleeding patient until a blood transfusion can be obtained. The Children’s Discovery Institute, National Institutes of Health (NIH) and Department of Defense (DoD) have each invested at least $1 million in funding so Pan and his team can further develop this technology.

A chemist by training, Pan was elected a Fellow of the Royal Society of Chemistry in 2015 and a Fellow of the American Heart Association in 2016. He is the director of the University of Illinois Bioengineering Professional Master’s of Engineering program.