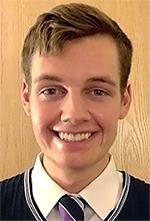 Photo of Jacob Calvert.
Jacob Calvert, a senior in Bioengineering at the University of Illinois at Urbana-Champaign, has won a 2015 Marshall Scholarship, an international award that allows him to pursue graduate study for two years in England.

Calvert, who is from Washington, Mo., is the third UI student in five years to earn the Marshall Scholarship and is one of 31 recipients in the 2015 program selected from approximately 900 nominated candidates across the country.

Established in 1953, the Marshall Scholarship enables U.S. students to conduct graduate study in the United Kingdom as a way to strengthen the relationship between the two countries. The program honors George C. Marshall, the primary author of the Marshall Plan, which helped the United States restore the economies of European countries devastated by World War II. During his career as a U.S. soldier and statesman, Marshall served as a special ambassador to China, Secretary of Defense, Secretary of State, and Army Chief of Staff. And, in 1953, he became the only soldier to earn the Nobel Peace Prize.

As part of Calvert’s two-year award, he will receive approximately $36,000 per year to cover accommodations, living expenses, tuition, fees, books, and transportation. In Fall 2015 he will enroll in a master’s degree program in mathematical sciences at the University of Bristol. In his second year, he plans to pursue a master’s in theoretical physics at the University of Manchester.

Calvert, who is minoring in mathematics at Illinois, plans to study “complex systems,” the science of understanding and predicting the behavior of systems of many interacting components.

“A favorite example of mine is an ant colony,” he said. “Individual ants exhibit simple behaviors that are only informed by their local environments. Yet, together, the ant colony has global organization, with ants executing algorithms for foraging food and defending their anthill. It’s reminiscent of the structure of the brain, the stock market, and power grids — which are all complex systems.”

A positive faculty mentoring experience early in his career at Illinois helped nurture Calvert’s desire to engage in meaningful global pursuits, and he credits Bioengineering Assistant Professor Sua Myong’s efforts with sparking his own desire to be a faculty mentor one day.

During the summer after his freshman year, Prof. Myong asked him to offer his opinion on and assistance with another student's experimental design, based on results from Calvert's experiments.

“Her simple gesture was exceptional mentorship in disguise,” he said. “Being asked to contribute made me feel valued, engaged, and demonstrated the utility of my project. Three years later, Prof. Myong continues to encourage my growth as both a researcher and as an educator. … I wholeheartedly consider working with Prof. Myong to be one of the greatest joys of my life.”

“Jacob has earned the respect and admiration of everyone around him, when it would be easy for other undergraduates (and graduate students) to resent his academic success,” said David Schug, director of the National and International Scholarships Program at Illinois. “Instead, his humble persona and genuine interest in others make him as admired for his personal attributes as he is for his intelligence. Here is a sincere and earnest young man who belongs in the academy learning from top minds in the world and sharing his knowledge with those around him.”

Next year’s journey to England as a Marshall Scholar will be the first time Calvert will have traveled outside the United States, and he is excited about the opportunity. “I’m looking forward to gaining an insider’s perspective on the political, economic, and cultural matters (that) mean the most to U.K. citizens,” he said.

He said he was attracted to the Bristol program “by the Bristol Centre for Complexity Sciences, one of the world’s few hubs of complex systems research.” And, at Manchester, he is interested in conducting research as part of the Complex Systems and Statistical Physics Group, a team whose work closely aligns with the type of research he hopes to do in his eventual career as a professor.

Calvert’s ultimate goal is to apply his bioengineering experience — developing holistic theories and understanding their influence on global health — to the practical application of solving complex system problems in many different disciplines.

Marshall Scholars earn advanced degrees in one-, two-, or three-year programs and may choose to attend almost any British university, with final placement determined by the individual institution. Each year, up to 40 Marshall Scholars, endorsed by their respective universities, are selected from U.S. college students or recent graduates who demonstrate strong academic success and the potential to be model global leaders and ambassadors.